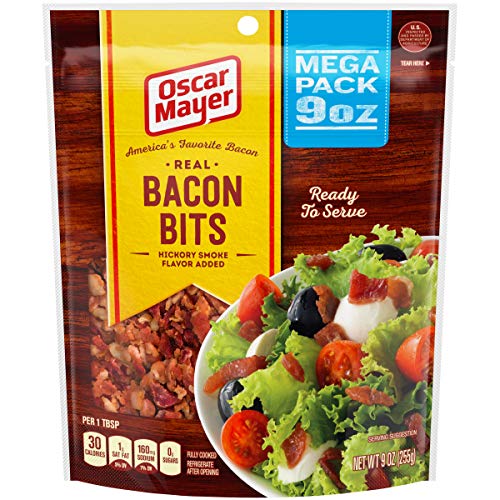 When AC recently asked, "What could you not live without?" There were only a few things that came to mind. Oscar Mayer Ready to Serve Bacon was one of them. With approximately 15 strips of pre-cooked bacon in each box, Oscar Mayer has a hit a home run in my family.

"Why bacon?" you might ask. Only in recent years have I become such a bacon fan. Not that I ever didn't like it, I just never cared for cooking it before. As it turns out, bacon is a tasty addition to just about any meal. Breakfast, lunch, or dinner: bacon makes it better. Turkey sandwich? Why not a turkey club instead. Scrambled eggs? Throw in some chopped up bacon and cheese and make a breakfast burrito. Salad? You guessed it: bacon makes it better.

The problem with bacon has always been cooking it. This is primarily why I rarely ever had bacon in my home until Oscar Mayer's Ready to Serve Bacon invention. I did try to cook bacon a couple of times over the years, and it just never worked for me. I would invariably burn it and make a greasy mess all over my kitchen.

Typically available in the standard 1 lb packages, when would we ever eat that much bacon at a time? I think I was supposed to cook part of the package, and then save the rest for next time, right? After the lousy cooking experience and the greasy counters, stove, and floor, the other half of the package would undoubtedly be tossed after a week or so.

Enter Oscar Mayer and their ingenious bacon in a box. Yes, you can now microwave a couple of slices of bacon at a time to crispy deliciousness with no mess and no waste.

The package contains approximately 15 slices of bacon, in 5 layers of 3 slices each. Separating each layer is a white, wax-type paper that you microwave the bacon on to achieve the optimum crispness. For the standard 3-slice portion, my newer microwave cooks the bacon perfectly in 30 seconds. For a double portion, 45 seconds is usually sufficient.

Finally, no more bland sandwiches for me or the kids. Take almost any meal from cold and boring to warm, crunchy, and delicious in under a minute. Also, Oscar Mayer has recently introduced a second "Thick Cut" version of their Ready to Serve Bacon. I have not tried this newer variety yet, but I'm sure it will boast all of the same conveniences and yumminess that the original version does.

BESTSELLER NO. 4 in 2020
Check Price on Amazon.com