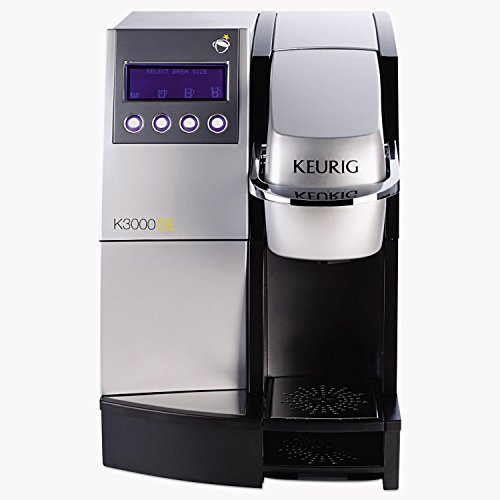 The Keurig B3000 is a single-cup brewing system that can brew a cup in as little as one minute. It is designed for large offices that have 30 or more employees. The system is equipped with K-cup and mug sensors to prevent accidental brewing. Let's take a look at some of the other features offered by this brewing system.

The Keurig B3000 uses K-Cups to brew single cups of coffee. The system will automatically eject and store the used K-Cups. The Keurig B3000 can brew four different sizes. These sizes include four, six, eight, and ten ounces.

The Keurig B3000 brewing system is also equipped with a removable drip tray. This makes the unit much easier to clean. Also, the drip tray can be removed when you simply want to use a larger travel-sized mug to hold the coffee.

You also won't have to worry about refilling a water reservoir every so often. The Keurig B3000 can be plumbed directly to a water line. This provides enough water so that the system can produce unlimited brews. The Keurig B3000 is designed to brew a single cup of coffee every 60 seconds. The brewer can also produce hot water at the press of a button. This feature is useful if you want to make a cup of tea or hot chocolate.

The Keurig B3000 is equipped with an easy-to-read LCD display. The screen provides step-by-step brewing instructions so that all employees can easily use the machine. The Keurig B3000 also provides multiple language options with users being able to select from three different languages on the screen.

If you prefer to setup the system to charge to brew cups of coffee, then you will like the fact that the Keurig B3000 is vending compatible. The coin changer can accept nickels, dimes, and quarters. You can also use Canadian dollar coins with the vending system.

The Keurig B3000 brewing system is perfect for offices with at least 30 employees. It can brew either four, six, eight, or ten-ounce cups of coffee. It can also be plumbed directly to a water line so that you don't have to worry about refilling a water reservoir. The Keurig B3000 is also equipped with a removable drip tray so that you can use larger travel-sized mugs.